FacebookTwitterWhatsAppEmail
This Portrait of Woman, called of Ginevra de' Benci is a picture attributed to Leonardo Da Vinci, dated around 1474-76. It is made with tempera and oil paint on poplar wood. It measures 38.8 cm. high and 36.7 cm. Wide. It was acquired by the National Gallery of Art in Washington in 1967 for 5 million dollars paid to the Royal House of Liechtenstein, a record price for that time.

It is believed that it is a portrait of Ginevra de 'Benci, which would explain the representation of the juniper behind him. In fact, it is also known as Portrait of a young woman before a juniper, although the other name is now more common. She was a lady of the fifteenth century aristocratic class of Florence, admired for her exceptional intelligence by her Florentine contemporaries. Geneva Benci is remembered today only for being the subject of one of the 17 paintings attributed to Leonardo da Vinci. Possibly in the past it was bigger, having shortened by the bottom.

It is considered that it is the work of the same author of The Lady of the Ermine of the Czartoryski Museum, and in general it is considered that the author of both was Leonardo, but not without dissenting voices within the criticism. It could have been done on the occasion of the marriage of Geneva, in 1474 or, since she appears more than 18 years old, it could have been a commission from later years of the Venetian ambassador Bernardo Bembo, who had a platonic friendship with the lady. Pijoán considers that it is dated around 1504, when Geneva would be thirty years old.

It stands out for its strange luminosity, and the attention paid to detail. There are touches of light in the hair, in the style of flamenco painting. The look of the model shows seriousness and at the same time an exceptional beauty, classic Renaissance model. The painter extended the painting, in some places, with his fingers, thus leaving his fingerprints marked.

On the back is a garland, with a branch of laurel and another palm, tied by a card in which it says "VIRTUTEM FORMA DECORAT" (beauty adorns virtue). The painting on the reverse could allude to the chastity of the loving sentiment that Guinevere inspired.

"Ginevra de' Benci" is at the 2nd Position in this list. 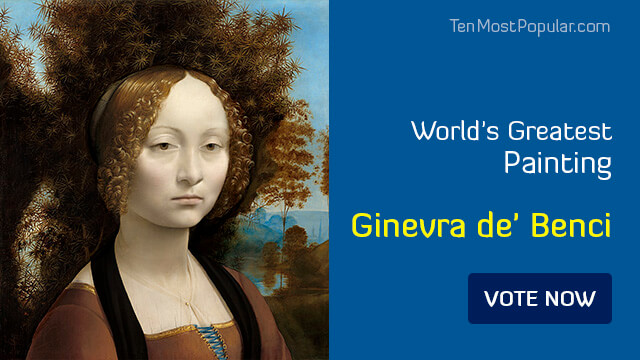