Adoration of the Magi

FacebookTwitterWhatsAppEmail
Adoration of the Magi is the name given to the set of three paintings by the Renaissance painter Andrea Mantegna, assembled in a triptych, thus exhibited in the Uffizi Gallery in Florence. These are three paintings of the Adoration of the Magi, the Circumcision of Jesus and the Ascension, in tempera on wood dating from 1461, that appeared in the chapel of Ludovic Gonzaga of the San Giorgio Castle of the Ducal Palace of Mantua, with the famous painting also from Mantegna, The Death of the Virgin (Prado Museum, Madrid). Tables scattered after the restructuring of the chapel. The triptych belonged to Don Antonio de Medici in 1587 and he entered the collections of the Uffizi in 1632.

"Adoration of the Magi" is at the 9th Position in this list. 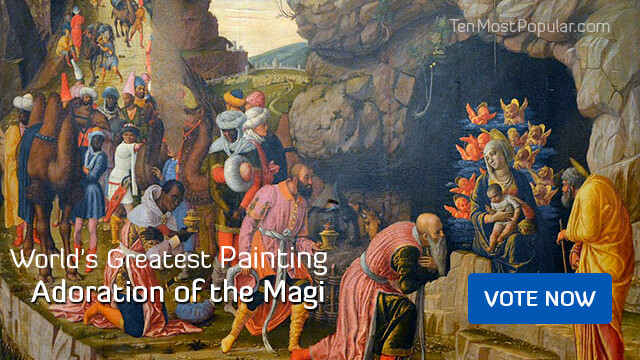 Total Votes: 59
Votes received:1
Up votes:1
Down votes:0
2.04% Popularity
100% Up votes
0% Down votes
Go to voting page
Comments on Adoration of the Magi
Submit
Cancel