Inland taipan, snake of small scales or taipan snake (Oxyuranus microlepidotus) is a species of snake of the Elapidae family native to Australia and the most poisonous terrestrial snake in the world. is a kind of Taipan belonging to the family Elapidae. Although extremely poisonous, it is shy and docile.

This snake is brown in color, ranging in color from dark brown to beige olive green. It is clearer in summer than in winter which allows it to accumulate more heat during cold seasons. Its back, sides and tail may have various shades. Blackish scales outline on the sides and back lines that intertwine form herringbones of varying size and inclination. The head and neck are usually darker than the rest of the body. The eyes are medium in size, with a dark brown iris, no colored ring around the round pupil. It is often more than 2 meters long.

The virulence of the venom of the desert Taïpan and its rapidity of action make it the world's most venomous snake. A taipan bite contains enough poison to kill 125 adults or 253,000 mice. The average delivery of poison is 44 mg, 110 mg is the largest record. Its venom is 200-500 times more toxic than most rattlesnakes and 50 times more toxic than that of a cobra. The poison has neurotoxic action and could potentially kill an adult human in less than 8 minutes. There is no documented information on human fatalities when the bite was treated with antisera.

Accidents are rare, but anyone bitten should receive a specific serum injection as soon as possible.

Until the middle of the 20th century, a taipan bite was synonymous with death. The first antidote was developed in 1955. Five years ago, a snake hunter, Kevin Budden, had been bitten by a taipan. The young man succumbed to the effects of the poison, but he had time to bring the snake living in the Cairns Hospital where the antidote was to be developed and developed Commonwealth Scientific and Industrial Research Organization in Melbourne.

A cell biology study led by Bryan Fry, From the University of Queensland, revealed that a sample of the desert Taipan venom, collected in 1950 by Kevin Budden, was still fully active many decades later.

The Taïpan of the desert and the man

Like most other snakes, they are not aggressive towards the man and will only attack him if they feel threatened, he can then be very aggressive, react strongly and hit several times.

However, it is not the species that causes the most fatal cases. Bites often occur when you try to catch it. Moreover, the encounter between the human being and the snake is extremely rare, because the desert taipan lives in remote places. The Acanthophis and Notechis are more incriminating this species in the ophidisme Australian.

"Inland Taipan" is at the 1st Position in this list.

Most Poisonous Snake in the World - Deadliest Snakes List 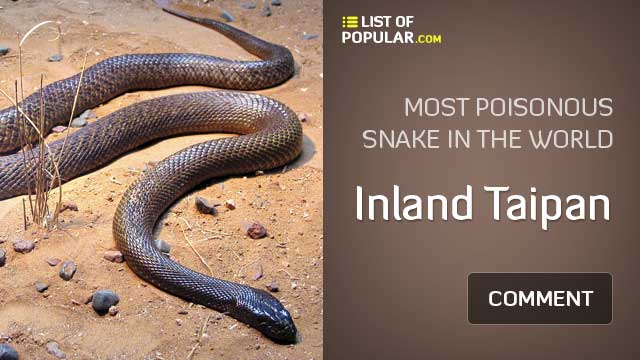