FacebookTwitterWhatsAppEmail
The dromedary or Arabian camel (Camelus dromedarius) is a species of artiodactyl mammal of the Camelidae family. It is similar to the Bactrian camel (Camelus ferus), which is differentiated by its generally shorter coat, less robust body and the presence of a hump instead of two. Subspecies are not recognized.

Like its Asian cousin, it is a tilópodo without horns, with the nostrils forming oblique openings, the upper lip divided and movable separately and extensible, with hooves, the abdomen raised and long and thin legs. Its anatomy shows all kinds of adaptations to life in the warm, sandy deserts where it lives, the knees and ankles have calluses that make them more resistant to the burning of the sand when they sit, their long and thin eyelashes keep their eyes safe from sand, and in the hump maintain a deposit of fat that can be nourished and even generate water if necessary. Their ability to resist dehydration has made them very valuable animals in the desert. The dromedary can drink up to 150 liters of water in a very short time.

The dromedaries are native to the Arabian peninsula, although they have been introduced by man in many places, and the cases in which these animals have escaped and formed semi-wild populations are not uncommon. As an example we can mention the camels of the Sahara, introduced for the first time in Roman times, and those of Australia, who arrived there during the English explorations of the 18th century, from specimens transported from the Canary Islands. The use of this animal as an engine of work in agricultural tasks has been common in this archipelago until the recent industrialization, generating terms such asguelfo, to define the breeding of the dromedary.

In the 6th Dynasty of Egypt, an engraving of Aswan, with the image of a dromedary and its rider, is deduced, denying the arrival of this animal to the desert of the Sahara, coming from the East, in Christian times.

Numerous literary, epigraphic and papyrological references to the presence of the dromedarii in the Roman armies are preserved, and it is estimated that the first unit that counted with them was formed in the time of the emperor Trajan, although the Romans themselves knew its use by of allies and enemies for a long time.

"Dromedary camel" is at the 15th Position in this list. 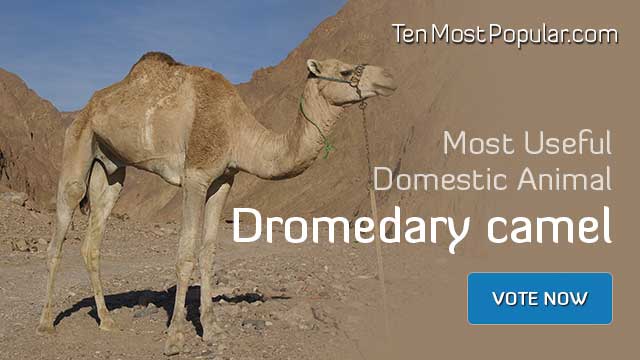