The cat or domestic cat (Felis silvestris catus) is one of the oldest pets of humans. The domestic cat belongs to the feline family (Felidae). The word cat is also common, sometimes more specifically in the case of a female cat. A male cat is called a tom or tomcat, and a young cat a kitten.

The scientific name of the cat was published in 1758 as Felis catus by Carl Linnaeus in the tenth edition of Systema naturae. The name of the feral cat, from which the domestic cat descends, was published in 1777 by Johann Christian von Schreber as Felis silvestris. Of the vast majority of animals that are domesticated, the scientific name is derived from the name of the wild ancestors. In 2003, the International Commission on Zoological Nomenclature stated in Opinion 2027 it is established that this principle must be followed for all domestic species, and that the name of the wild species has priority over that of the domestic species, even if the latter has been previously published. If the domestic cat is considered a subspecies of the wild cat, then the correct name is for the species Felis silvestris, and the trinomas for the subspecies Felis silvestris catus.

The lifespan of domestic cats is roughly the same as that of the other cats. A cat can be considered old after ten years. Cats die on average after fourteen to sixteen years. The oldest Dutch cat was 28 years old. The oldest cat in the world was 38 years and 1 day old. In general, ages are difficult to control because cats do not have a birth certificate. Breed cats have this, but on average they are less old, around 10-13 years old. This is due to congenital diseases that occur more often in purebred cats due to a high inbreeding coefficient. A similar picture is also seen with purebred dogs.

The skeleton of a cat consists of 250 bones. Like all carnivores (meat eaters), cats are equipped to hunt prey and devour them. Cats have a fairly round head and a short snout, large eyes, sensitive whiskers near the mouth and sharp raised ears. They have short wide jaws with strong cutting teeth and sharp incisors. Cats have a total of 30 teeth. In the upper jaw they have 6 incisors, 2 canines, 6 preselections and 2 molars. In the lower jaw they have 6 incisors, 2 canines, 4 preselections and 2 molars. Their jaw cannot make a chew, the cat tears its food and uses the very strong stomach acid to digest the food. The tongue is covered with a layer of raw papilla which is very useful for personal care. The cat's tongue is rougher than the male's, this way she can wash her boy better.

Most cats have good eyesight and can see well in the dark, because they have more rods than cones in their eyes. This allows them to observe well in the twilight, but with complete darkness they see nothing. Their ability to distinguish colors, on the other hand, is weak, but cats are not color blind. Reflective tissue (the tapetum lucidum) is located on the back wall of the eye, causing cat's eyes to sparkle in the dark. The field of view of a cat is 285°, compared to a human being 210°. The irises have the shape of a vertical slit. Every eye is protected by a third eyelid, also called a fleece called.

Cats are very mobile: they can cover short distances quickly and are good climbers. Unlike dogs, cats have limited endurance. Cats usually do not like water, but can swim well. They hunt for their prey by stalking them silently. When the cat is close enough, he jumps the prey and catches the animal with its sharp teeth and claws. The tendency to play with the injured prey for a long time is observed in all cats, including the domestic cat. It is a means to defuse prey without getting injured if it defends itself by biting.

In addition to hunting, cats can also be very lazy. They like to sit in the sun or go to sleep on a warm surface. This is also necessary because that time allows the cat to digest the relatively large and nutritious prey. The average cat sleeps or lazes around for 16 to 18 hours a day.

Just like lions and tigers, they lick themselves clean with their tongues, they often do this before bedtime, or after waking up. The instinctive care of the coat with teeth, saliva with enzymes and fat from a gland above the tail takes about two hours a day. This causes the cat to swallow a lot of loose hair. These usually leave the body via the intestinal tract. However, if the cat gets too many hairs in a short time, a hairball can occur that is broken out. Long-haired cats incidentally suffer more from hairballs than short-haired ones. If a cat makes unsuccessful attempts to vomit a hairball, there may be a blockage. This can be life threatening.

The domestic cat is a socially flexible species. In an environment with dispersed food sources and low population density, cats live solitary or in small groups of closely related females. The larger, non-overlapping territories of males cover two or more of the smaller territories of females. In an urban environment or at farms, food sources are more centralized, leading to the formation of high-density groups of multiple males and males. Several females with smaller, overlapping home ranges and a promiscuous pairing system. Depending on the availability of food sources, cats are therefore solitary or social animals. If they have the option, females will form family groups. Their female offspring stays with them and in turn get kittens, so that a matriarchal group is created. The male leaves the group when they become sexually mature.

"Cats" is at the 5th Position in this list. 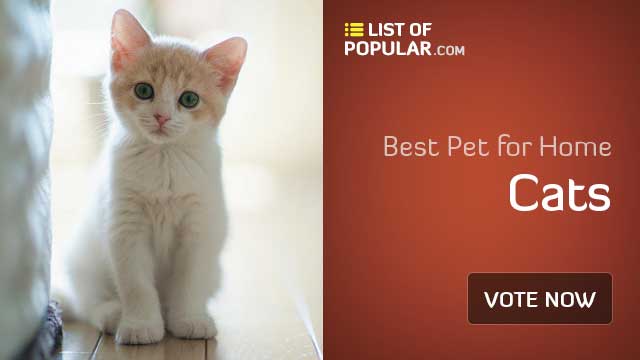