Kim Yoo-jung is a famous actress of Korea. She is known as a famous celebrity and has a strong presence in both the Film and Television industry. In 2017, Yoo Jung ranked 8th in the "Forbes Korea Power Celebrity" list ("The most influential celebrities in Korea"), becoming the youngest famous actress to ever be in the TOP 10 (18 years old).

Kim Yoo-jung was born in Seoul, South Korea, on September 22nd 1999. She was discovered at the age of five in a competition attended by her older sister, where she won the Most Popular Award despite not being among the competitors. She debuted on television in the advertising of some biscuits in 2003, and the following year she began acting in the DMZ film. She continues to appear on the big screen in films such as Lady Vendetta, Naesaengae gajang areumdawun iljuil, The Chaser and Haeundae. She quickly became one of the most famous actress, in 2008 she received her first prize for the series Iljimae, followed by a positive reception also for Dong-yi and Yokmangeui bulkkot. In Gumiho - Yeo-unu-idyeon plays for the first time a main role that is not the young version of the female protagonist.

In 2012 her popularity grew with Haereul pum-eun and May Queen, followed in 2013 by the movie Dongchangsaeng and the family series Hwanggeum mujigae. In 2015 she is the young high schooler Oh Ah-ran in a series that denounces bullying, Angry Mom.

In 2015 she starred in the series Angry Mom which dealt with the issue of school violence. During the same year she participated in Love Cells, a web series of two seasons adapted from the webtoon of the same name and playing the daughter of a murderer in the movie Circle of Atonement.

She was presenter of the Inkigayo music program from November 2014 to April 2016.

In August 2016, Kim starred for the first time as an adult with Park Bo-gum, in the drama Light of the moon painted by the clouds. A national and international success, Luz de luna painted by the clouds reached peaks of audience of 23.3% and its popularity was referred to as the "Moonlight Syndrome".

In 2017, she starred alongside Cha Tae-hyun in the romantic comedy Because I Love You. Kim also had her first meeting fans on her tour to Taipei, Taiwan as the first stop on the ATT Show Box on February 4, 2017.

"Kim Yoo-jung" is at the 1st Position in this list.

Most Beautiful Korean Actress | List of Hottest Actresses from Korea 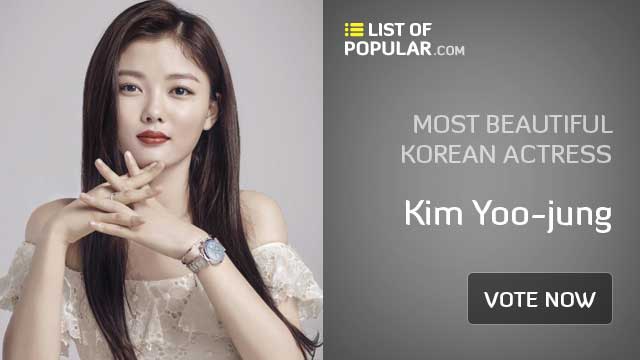