Kim Yoo-jung (born September 22, 1999) is a South Korean actress, model and host. After her debut in 2003, she became one of the best child actresses in Korea. She transitioned into a teen actress by playing roles in various television dramas such as Dong Yi (2010), Moon Embracing the Sun (2012), and Angry Mom (2015). She also hosted at one of SBS Inkigayo's music events from November 2014 to April 2016.

Kim Yoo-jung has been fondly called "Little Korean Sister" since she was a child, and also earned the nickname "Fairy Sageuk" after playing roles in several historical dramas that are popular in Korea. In addition, in the field of advertising, she got the titles "Next Generation Queen of Advertisements" and "Advertising Fairies".

Kim Yoo-jung was born in Seoul, South Korea on September 22, 1999. She was discovered at the age of five in a competition in which her older sister participated, where she won the Most Popular Award despite not being among the competitors. She made her television debut in advertising some biscuits in 2003, and the following year she began acting in the film DMZ. She continues to appear on the big screen in films such as Lady Vendetta, Naesaengae gajang areumdawun iljuil, The Chaser and Tidal Wave, arriving on television in 2006. She quickly became one of the most requested child actresses at home. In 2008 she received her first prize for the seriesIljimae, followed by a positive welcome also for Dong-yi and Yokmangeui bulkkot. In Gumiho - Yeo-unu-idyeon plays for the first time a main role that is not the young version of the female protagonist.

In 2012 her popularity grew with Haereul pum-eun from May Queen, followed in 2013 by the film Dong-chang-saeng and the family series Hwanggeum mujigae. In 2015 she was the young high school student Oh Ah-ran in a series that denounced bullying, Angry Mom.

She debuted at age four. By the time she was in 5th grade, Kim had already participated in 13 series and 15 movies. In 2008, she received her first acting award as "Best Child Actress" for the Iljimae series.

She became popular in 2012 starring drama Moon Embracing the Sun. The drama exceeded 40% in ratings and earned the status of "national drama". She continued to be well evaluated in series such as May Queen (2012) and in the 2013 film 'Commitment' with a supporting character, and also by Golden Rainbow (2013).

In 2014, she played an abusive teenager in Thread of Lies that was critically acclaimed. She also starred in the drama Secret Door and presenter on Inkigayo in November 2014 leaving the program in April 2016.

In 2015 she starred in the series "Angry Mom" which dealt with the issue of school violence. During the same year, she participated in Love Cells, a two-season web series adapted from the webtoon of the same name and playing the daughter of an assassin in the movie Circle of Atonement.

She was presenter of the music program Inkigayo from November 2014 to April 2016.

In 2017, she starred opposite Cha Tae-hyun in the romantic comedy "Because I Love You". Kim also had her first meeting fans on her tour to Taipei, Taiwan as the first stop on the ATT Show Box on February 4, 2017.

In May 2019 she was announced that she would be joining the cast of the mystery film The Eighth Night where she will play Ae Ran, a young psychic.

In late January 2020, she was announced that she had joined the main cast of the Convenience Store Saet Byul series where she will bring to life the tough but quirky Jung Saet-byul, a part-time worker.

Kim Yoo-Jung moved to Daehwa Elementary School at the same time as her family moved to Ilsan, Goyang, Gyeonggi. After graduating from Daesong Middle School in March 2015, she continued her studies at Hongik Girls' High School in Mapo District, Seoul. In the same year in August, she decided to move to the Goyang Arts High School in Gyeonggi. Kim Yoo-jung continues her active school life amid her busy life as an actress. One of the activities that she did before graduating in high school was to do a drama show and 10 regular shows.

Kim Yoo-jung graduated from the Shake Arts High School in February 2018. She decided to temporarily not continue her studies and would focus on acting.

"Kim Yoo-jung" is at the 2nd Position in this list. 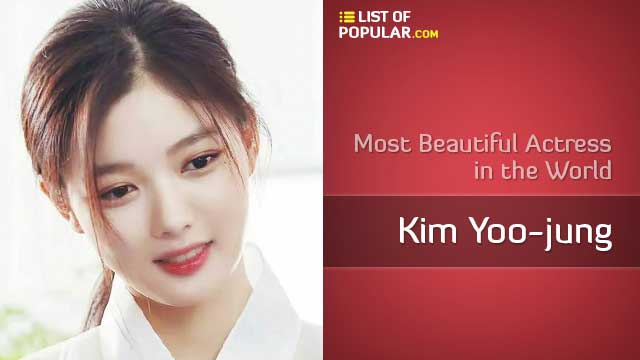