Katrina Kaif (in Hindi: कैटरीना कैफ़, Katrina Turquotte, Hong Kong, 16 of July, 1983) is an actress and model, in India she has gained fame for her work in many Bollywood films, and has also worked in Telugu and Malayalam films.

At the beginning of 2014 Katrina had participated in a total of 31 films and was one of the best-valued actresses in Bollywood, besides being considered the sexiest woman in India according to the women's magazines FHM and Maxim.

Kaif was born in Hong Kong, and together with her family she lived in various countries before settling in India. As a teenager she began her career as an advertising model and subsequently worked as a fashion model. The filmmaker Kaizad Gustad discovered her at a film festival in London and hired her to act in the movie Boom (2003). While filming in India, Kaif did numerous works as a model. However, film producers hesitated to hire her because of her lack knowledge of Hindi. After participating in the successful Telugu film Malliswari (2004), did Kaif achieve commercial success in Bollywood with the romantic comedies Maine Pyaar Kyun Kiya? (2005) and Namastey London (2007). These films were followed by other blockbusters, however Kaif was criticized for her performance, her repetitive roles and her inclination to appear in androcentric films.

Kaif's work in the film about terrorism New York (2009) was better received, earning her a nomination for the Best Actress Award by Filmfare. After her participation in Ajab Prem Ki Ghazab Kahani (2009), Raajneeti (2010) and Zindagi Na Milegi Dobara (2011), she was nominated for the second time by Filmfare for her performance in Mere Brother Ki Dulhan (2011). She participated in the thriller action movie Ek Tha Tiger (2012) and Dhoom 3 (2013), which are one of the highest grossing films in Bollywood history. Although she collected diverse opinions from the critic for her performance, she managed to be a commercially successful actress in Hindi cinema.

Kaif was born on July 16, 1983, in Hong Kong, of a kashmiri father (Mohamed Kaif), and a British mother (Suzzane Turquotte). Her mother, a lawyer graduated from Harvard, which has subsequently spent working on charity. Her parents separated when Kaif was very young. Kaif has seven sisters. Her mother raised her in Hawaii and later moved to the country of origin of her father, India, although in 2009 she indicated that she does not maintain contact with him.

Her parents divorced when she was very young and she was mainly raised by her mother. When she went to India to work, she changed her last name to Kaif. She stated that this was originally an Indian name.

Kaif has often moved in her youth and has traveled extensively. From her hometown of Hong Kong, her family moved to China and then to Japan. At the age of 8 she went to France with her mother. After this she lived for a few months in Switzerland, Poland, Germany, Belgium and a number of other European countries. She then moved to Hawaii with her family. Eventually her family moved to her mother's native country, the United Kingdom. It is often said that Kaif is from London, although she has only lived there for three months. After this she traveled to Mumbai.

At the age of fourteen she was detected by a model agent. Her first job was for a jewelry campaign. She continued working as an advertising model in London, for campaigns of houses such as La Senza and Arcadius, and worked at London Fashion Week.

Modeling work in London led her to be discovered by filmmaker Kaizad Gustad, who gave her a role in her film Boom (2003). She moved to Mumbai, and was offered a series of modeling tasks. However, movie producers were initially reluctant to hire her because she couldn't speak Hindi.

Kaif succeeded with the Sarkar (2005) movie, where she played the supporting role of Abhishek Bachchan's girlfriend. Her next film, Maine Pyaar Kyun Kiya (2005), where she joined Salman Khan, earned her the Stardust Breakthrough Award.

In 2007, Kaif appeared in the hit movie Namastey London, where she played the role of a young British woman of Indian origin with Akshay Kumar. That same year she also works in Humko Deewana Kar Gaye (2006). Since then, she has appeared in a series of blockbusters that include Apne, Partner and Welcome.

In 2008 for the first time she played a dramatic role in the action movie Race by Abbas-Mustan. She played the role of Saif Ali Khan's secretary who is secretly in love with her hostile half-brother played by Akshay Khanna. That same year she worked on the production of Anees Bazmee Singh Is Kinng, with Akshay Kumar, which was a great blockbuster. The last work of Kaif of the year 2008, was in Yuvvraaj of Subhash Ghai, which although it was a commercial failure, her script won her praise by the Library of the Academy of Motion Picture Arts and Sciences for its artistic value, original script with substance and for the movie as a whole.

Kaif's first film in 2009, New York, with John Abraham was a critical and commercial success. Kaif's work was much appreciated by critic Taran Adarsh, who said "Katrina is the biggest surprise. Known for her glamorous roles, Katrina shows that it can be delivered if the director and writer offer her a role with substance. She is surprising. In fact, people will see a different Katrina this time. "She later appeared in a small role as a motorcyclist girl in the multi-star action movie Blue, popularly known as the first underwater thriller in India. The same year she also worked alongside Akshay Kumar in "De Dana Dan" which was a successful movie.

In 2011 she appeared in the movie Bodyguard, presenting the first musical theme of that movie "Bodyguard Theme Song", and also made her great appearance in the movie Mere Brother Ki Dulhan, "A Bride for My Brother", and finally participated in the Agneepath movie. In 2012 she worked with Shahrukh Khan and Anushka Sharma in "Jab Tak Hai Jaan". There are many more movies like.... Dhoom 3, Ek Tha Tiger, Bang Bang, Agneepath, Phantom, Fitoor, and now she will star alongside Sidharth Malhotra in the movie "Baar Baar Dekho".

Kaif makes little known about her private life. It is known that she had a serious relationship with Salman Khan, one of the best known Bollywood actors. This relationship lasted for several years: in 2010 they broke up.

"Katrina Kaif" is at the 1st Position in this list. 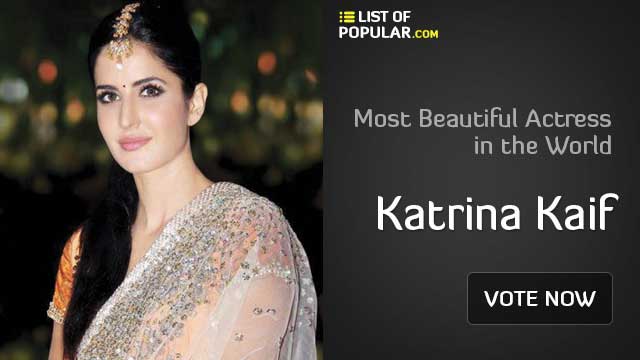 Total Votes: 8005
Votes received:500
Up votes:464
Down votes:36
6.7% Popularity
93% Up votes
7% Down votes
Go to voting page
Comments on Katrina Kaif
Submit
Cancel
14 Comments
She is my dream woman
6
0
Reply
Most Beautiful Woman in the world with pure heart, She's so Hardworking, Soo Talented. Indeed the Most Beautiful
6
0
Reply
She's the perfect definition of women- magnificently beautiful, amazingly talented and an awesome human being.
5
0
Reply
KATRINA KAIF IS ACTUALLY THE MOST BEAUTIFUL HUMAN BEING IN THE HISTORY OF MANKIND
4
0
Reply
Katrina Kaif is the Queen of all time
3
0
Reply
Queen of Bollywood
0
0
Reply
Undisputed Queen of Bollywood . The most hard working B town Diva
0
0
Reply
Very rarely we able to find such an amazing person but we are so lucky to have this girl here. Full of Talent + hardwork + Beauty = Perfection
0
0
Reply
I always love this styles of content, thanks for sharing, it’s really good content for readers, Sunny Leone , Salman Khan , Hannah Stocking , Guaynaa , Lele Pons , Anwar Jibawi .
0
0
Reply
Most beautiful human being❤️
0
0
Reply
she isnt an english actress!! wtf! she is a bollywood actress who never won a single award! she looks stupid, she speaks stupidly!
0
0
Reply
She is the most beautiful inside and outside as well, she is a genuinely pure soul, so talented, so humbled, everything she proposes, she archieves.
0
0
Reply
why is she here??? she sucks!
0
0
Reply
Queen of the Universe
0
0
Reply