Sonu Nigam was born on 30 of July of 1973 in Faridabad, Haryana, India, Agam Kumar Nigam and Shobha Nigam. He is an Indian musician and singer who sings mainly in Hindi and Kannada but also in other languages ​​such as Urdu, Oriya, Tamil, Assamese, Punjabi, Bengali. He has sung in many films of Shahrukh Khan in Bollywood. He has published many Indian pop albums and has also participated as an actor in several films. For some time he changed the writing of his name by numerology issues from "Nigam" to "Niigaam", but subsequently reversed it.

In 2006 he presented the radio show "Life Ki Dhun with Sonu Niigaam" on Radiocity 91 FM. He took this opportunity to interview other great musicians such as the famous Mangeshkar Tin.

Sonu began his film career in his childhood with films like "Betaab" (1983). As an adult he has co-starred "Jaani Dushman: Ek Anokhi Kahani" alongside Sunny Deol, Manisha Koirala and Akshay Kumar, and starred in "Kash Aap Hamare Hote" alongside Juhi Babbar, daughter of Raj Babbar, and at the end of "Love in Nepal" next to Flora Saini and Sweta Keswani. Unfortunately, all these films did not have much public success, although the critics for "Love In Nepal" were very good. Since this film, Sonu has not participated in any other film, but currently he has some scripts in his house and it is said that maybe he is going to make the movie "Anhkhon Ankhon Main", where he would play the role of a blind singer.

"Sonu Nigam" is at the 10th Position in this list. 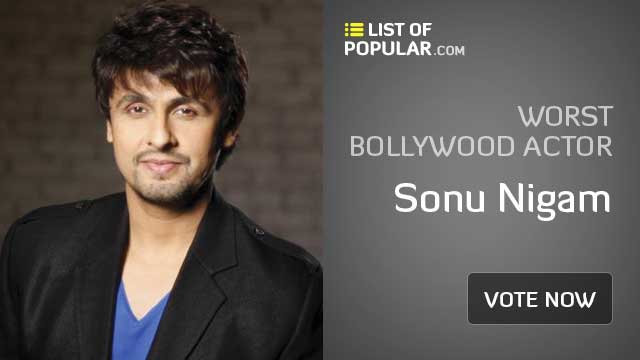